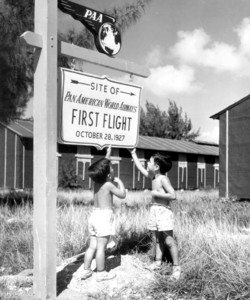 Almost 84 years ago, in October of 1927, Pan American Airlines made history, initiating the first commercial 90-mile flight between Key West and Cuba.  Originally a mail route, by the following January, Pan Am’s first passenger flight to Havana ushered in a new era in international aviation transportation, providing regularly scheduled flights in a ten-passenger Fokker aircraft.
Throughout the ensuing decades, Havana became a vacation playground for US citizens.  In 1960, the halcyon days came to an end, with a US-imposed embargo in response to Cuba’s nationalization of properties held by US citizens and corporations.  Since then, the prohibition against commercial, economic, and financial commerce and trade has proven to be the most enduring trade embargo in modern history.
While a decidedly controversial “hot potato”, demand to lift travel and trade restrictions with Cuba is forcing reconsideration of the embargo.  And Key West is poised to benefit.  After an arduous campaign that began in July of 2009, official notification arrived last Tuesday, via a letter to the Monroe County Airports Director, Peter Horton, from the US Custom and Border Protection’s Office of Field Operation, that the federal government has once again authorized direct Key West-Cuba flights.
Because the Key West International Airport is currently classified as a general aviation facility, flights will be limited, at first, to no more than 10 passengers.  Expansion plans are in the works to qualify it as a federal inspection station, the $2.25-million upgrade projected to take two years.  Upon completion, aircraft carrying more passengers will be permitted.
Horton has been busy laying the groundwork that will facilitate rapid implementation of flight service. He has approached four carriers, one of which — Miami-based C&T Charters — already possesses licenses from both the U.S. and Cuban governments to fly the route.
Travelers through the new point of entry are still bound to longstanding regulations imposed by the Office of Foreign Assets Control in the U.S. Department of the Treasury, in that they must hold either a general or specific license to make the trip.   A general license gives “blanket authorization” for such purposes as visiting relatives who are either Cuban nationals or US government-employed Americans working in Cuba; journalistic, educational or religious activities; professional research; and commercial exchange for the benefit of the Cuban populace, such as medical supplies.
For purposes not covered under a general license, a specific license is required.  This covers such purposes as freelance journalism, academic exchanges, athletic and cultural performance events supporting the Cuban people, and humanitarian initiatives.
Just last month, the current administration extended the embargo through September 14, 2012.  That’s just another year.  One can only speculate on the portent of that action.  Meanwhile, Key West will be busy, grooming its airport facility to capture whatever opportunities come its way.
24.5535966-81.7898098