Guests at the Tropical Inn often arrive with a list of “must do’s” in hand, and near the top is always to try the ubiquitous and (sometimes) authentic Key Lime Pie offered on virtually every menu in Key West.  Most are surprised to find that, with the exception of a tree here or there in someone’s garden, key limes are no longer commercially grown in the Keys.  The groves long ago gave way to development, so most of the limes that turn up in Key West pies come to us from from Mexico, or in the form of (gasp!) reconstitued bottled juice of unknown origin. 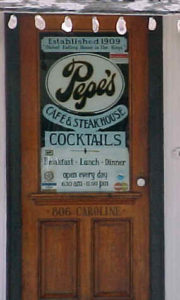 Each year there is a contest to determine the “best” key lime pie recipe.  The ingredients are pretty standard, so it’s always interesting to see what is done to distinguish the various renditions.  Even though it’s not a consistent award-winner, my favorite has always been the version served up at Pepe’s Cafe, billed as Key West’s “eldest eating house in the Florida Keys … a fairly good place, for quite a long while … open under old management”, over by the Bight.

They’re very generous about sharing the recipe (in fact, it’s right there on their website), so I’m giving away no secrets by posting it here –just annotating with a few tips.  The surprise note of cinnamon in the crust and the fact that they whip the egg whites before folding them into the filling set this recipe apart. The airiness of the egg whites give it a texture that compliments the delicate sweet-to-tangy balance, rendering it all “just so”. Heavenly.
In a mood to try it yourself?  Begin by setting your oven at 325 degrees, and while it’s heating up, make the graham cracker crust:
Pulse in a food processer enough really fresh graham crackers to make a cup and a half of crumbs.  Add 1/3 cup of melted unsalted butter, 1/4 cup of sugar, and one teaspoon of cinnamon.  Continue pulsing until all ingredients are nicely blended.  Press into an 8 or 9 inch pie pan.  Bake it about 10 minutes on the middle rack of your oven, then remove to cool completely.
Then, make the filling:
Separate two eggs, reserving the yolks for later.  Whip them on high in your stand mixer with paddle attachment until they are stiff.  If you have a hand mixer, no worries; it’ll just take a bit longer to achieve the same volume.  Set aside.

Pour the batter into the pie crust.  Bake about 20 minutes or until just set (it’ll go from gooey to jiggly).  Remove from the oven and cool completely before refrigerating at least 2 hours.  To serve, top with real whipped cream (if you have some of that aerated-oil-fake-whipped-cream stuff on hand, this is definitely NOT the time to use it, but don’t throw it out; who knew it makes a great face cream?) and garnish with a twist of lime (for this, use one of those big, shiny green Persians; key limes are too thin-skinned and not very pretty).