The Elusive Sawfish in the Florida Keys 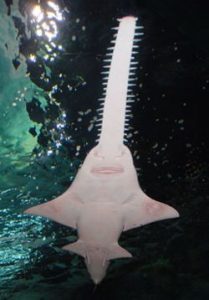 Sawfish, one of the rarest of marine oddities, are almost never spotted in the Florida Keys – even though the seagrass beds so extensive here are prime habitat.  But earlier this month, an Ohio family snorkeling in shallow waters off Sugarloaf Key, spotted an immature specimen that was estimated to be around ten feet long – and documented the close-enough-to-touch moment in photographs.  A juvenile at its size, adults of the species can reach 25 feet.
As part of the Florida Program for Shark Research at the Florida Museum of Natural History, scientists solicit reports from the public for inclusion in the first International Sawfish Encounter Database, hoping for insight into the elusive creature.


The sawfish is actually a unique type of ray, sporting a distinctive saw-like snout with protruding tooth-like scales (which are not replaced if lost), called a rostrum.  Like both sharks and rays, it belongs to a group of fish called elasmobranchs, having cartilaginous skeletal systems, no swim bladders, and reliant on their oil-filled livers for buoyancy.

Though many species of sawfish are distributed worldwide, Largetooth and Smalltooth Sawfish are the only two inhabiting US waters.  Overfishing, habitat destruction, and naturally low reproductive rates have resulted in their decline.    In 2003, they were placed on the federal endangered species list.  Since then, researchers at the museum have made an active effort to educate the public to the database compilation program, encouraging every sighting to be reported.


There is no estimate of the number of sawfish remaining in the wild, and harvest is strictly prohibited.  Southwest Florida and the Keys is significant habitat for the animals, and when captured, they are tagged by either traditional or more sophisticated – and costly – satellite-tracking devices.  George Burgess, Director of the shark research program, reports that the tagging of sawfish in the seagrass beds of the Keys “can be very important for the adult fish” – as borne out in this month’s sighting. 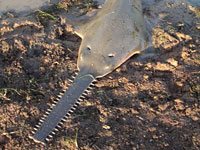 Commenting on the rarity of such an encounter, he said, “These guys have always been fairly rare because that’s the way the marine world works — larger predators are always found in lower numbers because they need more territory.  As scientists, we never did a good job recording where and when sawfish are found. Then we discovered they were disappearing on us.”