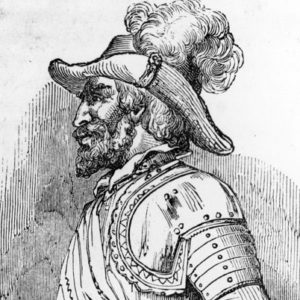 Did you know that Juan Ponce de Leon discovered the Florida Keys?  While there is no definitive proof that he actually walked the shores of Key West, recorded history tells us that 500 years ago this month, he was exploring the neighborhood.
Most think of Key West’s history as beginning in 1822.   The island, then known as Cayo Hueso, was purchased by Mobile, Alabama, native John Simonton from Juan Pablo Salas, who had acquired it through a Spanish land grant in 1815, in recognition of services rendered the Crown.   But, of course, there’s more before that.

Rewind to the year 1492, shortly after the end of the Crusades.  A certain Genoese mariner by the name of Christopher Columbus conceived the idea of searching out a new trade route to China by sailing westward around the world.  He went from one European court to another until King Ferdinand of Aragon and his wife, Queen Isabella, of Castile, agreed to sponsor him.  Basking in the heady success of the Christians at Grenada recently wresting back control of Spain from the Moors, they were willing to take a chance on the seafarer’s hunch.

Stumbling upon the New World while thinking it to be India, Columbus’ accidental discovery caused a sensation in Europe, whetting the appetite of every power to plunder the imagined treasures of the strange new frontier.  The Pope being in charge of such things at the time, divided the newly-discovered lands between Spain and Portugal and the rush was on, Ponce de Leon at the forefront of a long line of conquistadores to follow.

On Easter Sunday – late March of 1513 — Ponce first sighted land near present-day St. Augustine, while searching for the mythical Fountain of Youth.   On April 2, he claimed it for Spain.  Not realizing that it was a peninsula of a much larger continent, he thought he had discovered an island.
Sailing south, he avoided the swift northerly-flowing Gulf Stream by clinging to the coast.  He subsequently came to the crystalline basin of reefs, marshy shallows, and mangrove-tangled islands that we now know as the Florida Keys.  By June, he reached another archipelago of islands that he named “Tortugas” (Spanish for “turtles”).  Birds and sea turtles captured at what we now call the Dry Tortugas replenished his three tiny ships’ food supplies.
Upon his return to Spain, the notes and maps of Ponce’s discoveries in the New World became the first recorded history of Florida, the Florida Keys, and the Dry Tortugas.  Along with Cuba, they collectively became a colony, to be ruled by Spain, almost without interruption, for the next 270 years.
This year, Florida is celebrating the rich dynamic that our Spanish heritage has brought to our lives here in the State of Florida.  Placing our home in the Keys amongst the larger context of European exploration of the Caribbean and the New World enriches us with a deeper appreciation of our multi-cultural heritage and allows us to comprehend that our nation is a mere fledgling on the world stage.

When next in Key West, stay at the Tropical Inn and let your friendly hosts book an unforgetable day trip to the Dry Tortugas for you!