When we restored the Pineapple Lane Cottage, expanded the garden, and installed the hot tub a few years ago, we brought in lots of landscaping and covered the open spaces with brick pavers, blending the newer section with the older one, where the pool is located.  At the time, it still looked sparse, so we planted a Ficus tree (F. benjaminia, the common houseplant variety) that we “had on hand” between the cottage and the spa, to sort of break up the expanse and create some private areas.

Since then, the Ficus has outgrown its space, putting down aerial roots, its canopy spreading to shade out the understory plants.  It has truly “gone to banyan”, as is said colloquially, prompting a re-thinking of its role in the lower garden.  (A banyan tree can grow up to about 100 feet tall and spread over several acres — what were we thinking???)
In recent days, we were discussing with our Czech “maintenance engineer”, Jiri, the logistics of bringing down the Ficus and replacing it with some “found art” elements that have been collected here and there, to create a garden sculpture, of sorts.  Upon noticing that one of the components, a rusty old parrot cage, had a lock but no key, he inquired as to whether to cut it off before repainting. 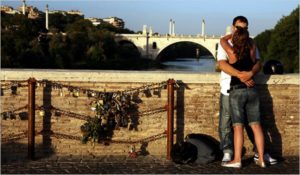 He shared with us a quaint European tradition in his home country:  love locks.  Couples, in an endearing gesture of devotion to one another, attach padlocks to public edifices, most commonly bridges, fences, and gates.   In Europe, this is a tradition that emerged in the early 2000s, but the practice is said to harken back to China, many centuries ago. Symbolically, when the lock snaps shut, closed forever, it captures an emotion … a location in time, binding that part of the participants’ biographies, shared and sealed forever in that moment.

In Paris, perhaps the most romantic city on Earth, the custom persists, in spite of city officials’ repeated attempts to discourage it (removal by bolt cutters) in the name of aesthetics.  In Moscow, the legislative council has given up, providing couples with metal trees on Luzhkof Bridge to declare their devotion.  The practice has even spread to the Wild Pacific Trail, near Vancouver, Canada, where there has been some dissention between those affixing the locks and those declaring that the practice mars the natural environment. 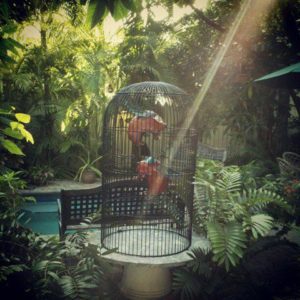 So … you can see where this is going.  Since the Tropical Inn is all about romantic getaways with that Significant Someone … it’s a “natural” — the beginning of a new tradition!  From now on, guests at the inn are invited to symbolize their own everlasting love by attaching a lock to the newly renovated bird cage that houses a pair of “flying pigs” — positioned “just so”, to replace the banyan tree!

Bring along the most distinctive, vintage or new padlock you can find.  We have some marking pens here, to affix your names.  Or you may prefer to attach one of those heart-shaped pet ID tags to your lock, engraved with your names and date.  You can make those on the spot at larger pet supply stores.  Some good places to look for unique old locks are Ebay.com and Etsy.com – or if you’re of a more contemporary inclination, a shiny new Yale might be more to your liking.   Any will accomplish the purpose and be a welcome addition.  See you in the garden!